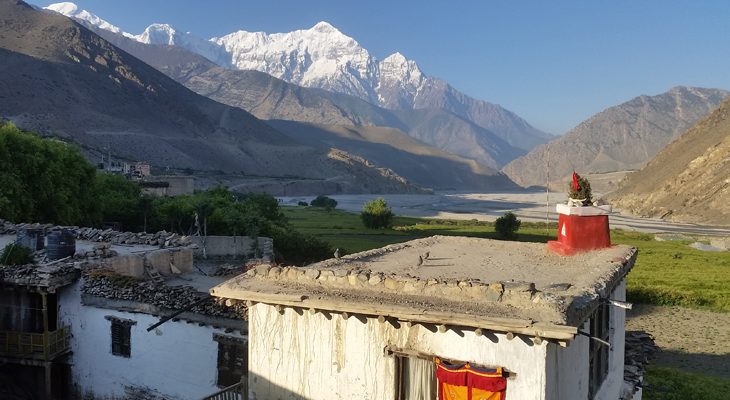 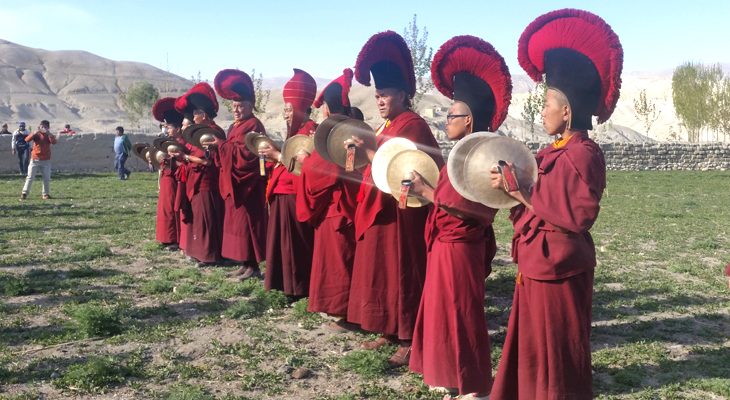 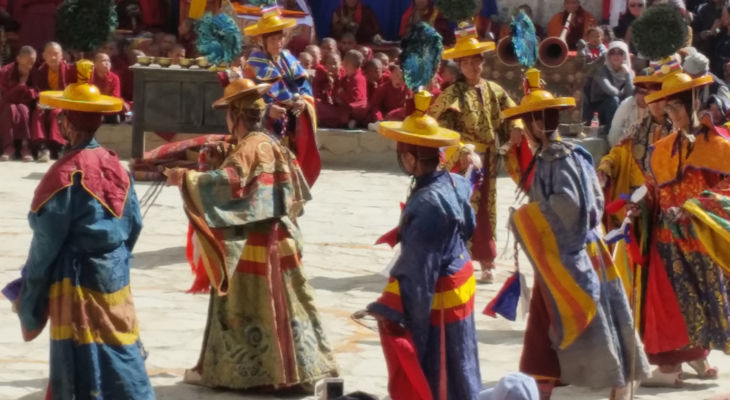 Upper Mustang Tiji festival trek 2021, a colorful yearly festival of monks celebrate on Lomanthang, an arid topography where we explore several Buddhist monastery and retreat caves of a lama.
3 days Tiji festival is an amiable Buddhist ceremonial, taking place at Lomanthang of Upper Mustang where can be traveled with obtaining restricted permits and mandatory to have a licensed guide. It is the most propitious and ancient Buddhist ritual celebrates in Lomanthang, the lost Buddhist kingdom of Nepal. The festival based on primeval folklore where the good victory on devil evil in Upper Mustang Nepal. 3 days Tiji event is a yearly monk's chant and dance with attired-colorful addressed-up is all about chasing the demon from the villages. The colorful Tiji festival celebrates right before the monsoon begins in Lomanthang. Upper Mustang Tiji festival trek route covers cultural blended villages antique monastery, friendly local people, thundering waterfall plus breathtaking mountain vista including above the 8000 m mount Dhaulagiri, Annapurna, Nilgiri, and several other trekking peaks.

Along Tiji festival Trek can also do side trek to Kora la pass (border of Tibet plateau), Konchok Ling Cave, Chhoser Jhong cave, Chhunsi cave, and Luri Gomba. Entire Upper Mustang trekking trail leading in a restricted zone where international travelers need to buy trekking permits which cost U$S500 for Upper Mustang special permit for 10 days then Rs-3000 for Annapurna conservation area one time entry fee.
During the Tiji Festival Trekking, the town square fills with characters clad as demons in flamboyant robes and hideous masks dancing about, slashing at the air with their swords and droning spells over onlookers. Spend the day steeped in the sights, sounds, and movements of this once-in-a-lifetime cultural marvel. This three-day ceremony is lit up with the colorful custom dress, dancing, music, and reenactments from the story of a deity and his demon father.

The trek to Mustang is a spectacular walk through Himalayan terrain that contrasts wildly with the lush fertile hills and valleys located to the south of the main Himalayan chain. Mustang is a barren landscape with only a few small green fields dotting a lunar landscape but boasts a remarkable spiritual heritage.
Tiji Festival Trek combines through Mustang’s fascinating villages, alongside Buddhist shrines and temples and in the shadows of the Himalayas' most iconic mountains, before arriving at the fabled walled city of Lo Manthang for 3 days of dancing at the Tenchi Festival. The terrain is rough and the altitude can be hard going but you will be in the safe hands of Himalayan expert Adventure and his team of sherpas. Expect mainly camping (fully supported) with a few lodges and hotels in Kathmandu and Pokhara for good measure.

We leave from the lodge, trek goes through the middle of village and checks restricted permits before leave village behind us. Now short ascend up, it present soaring peak and smoky Tibetan village with huge Kaligandi valley. The flat trail lead on arid canyon with eyeing beautiful image of mound to small Tengbe village. From here walk drop down to bank of river then short walk bring us at Chhusang village, a small village separated by Tetang River. We stop here for lunch, now trek continuous north coastline of river with viewing colorful traditional grave, Chorten and Stupa with favorable local atmosphere. Cross steel bridge over Kaligandaki River where river throughout natural cliff tunnel on ravine. East side of canyon has huge cliff with 16 beautiful cave. The trail upward with climbing on pasture and terrace to Tsaile village, the Chaile village located at tiny ridge, it offers amazing sunset view on Thorong peak, Tilicho peak and Nilgiri Himal.

Today walk is comparatively harder than the previous day because approximately 900 m ascending up and 450 m descending. The trail lead throughout traditional Chele village and straightway climbing up on huge cliff until Taklam La pass and then taking a break, Samar village and enjoy to see the breathtaking scenery of a nearby mountain. From here follow branch trail with lot shingles with descending to Chungsi Kangchung Cave also called Guru Rinpoche monastery. The semi-cave is decorated by lungda and Buddhist flags, it is popular for meditation and retreatment.
A trek resume and ascending up to Syangboche and then level trail continuous on the plateau to Ghiling village where highly chance to encounter wild animals likes Jackal, deer, and fox. A small village with Tibetan cultural influence has some beautiful monastery and large old-era Chhorten in the middle of the village.

A trek begins and walking throughout flat-roofed Tibetan culture village and beside of potatoes and buckwheat farm to Ghar gompa. Follow the gentle uphill track on the mountain where several rare herbs found and local use to make homeopathic medicine. The route crossing over Tholung-La (4340 m), the highest point of the Upper Mustang trek. From the summit enjoy to see the picturesque view of Lomanthang below popular trekking peak example Tilicho peak, Bhrikuti peak, Sarebung, and Damodar Danda. Lomanthang, the walled city has four beautiful monasteries and palace of Mustang king.

The first day of Tiji Festival called “Tsa Chham” start early morning from Chhyoden Gompa then a short walk to Thubchen monastery, the ritual begins by a group of monks on the big hall. After that decorative costumes wearer monks make a short walk to Gyalbo palace with permission of mustang king. Monk starts colorful Tiji festival around 2 pm courtyard of the palace. While sitting on the ground you will be greeted by women’s groups in fabulous traditional attires and jewelry. Only monks from Chhyoden gompa is performing on the festival but all the four Buddhist sects come to watch the annual ceremony. The group of monks is dancing in elaborate address and attires, where other lamas are playing copper trumpet dunchen, Gong, frame drum, cymbals, conch sell horn, and Tibetan Flageolets

Another important day in Tiji festival ceremony where the head of most villages attend and witness to watch colorful monk's annual festival. The Mustang king also a participant to see grand monks' festival. Again the second day of Tiji festival starting after midday in front of the royal palace. 2nd Day of Tenjee festival is one of the important ritual days along with the three days festival, the courtyard will be occupied by native and international visitor. The local come with colorful dressed-up as well as different old-style jewelry make the ceremony more vivid and worth it. Better to make your way to square as early as possible, there will be hives of people to observe the cultural show. The fantastic Himalayan festival will continue with a performance of Buddhism monks on the rhythm of Buddhist chant, the yellow and red hat wear monk with play cymbals, various dungchen, human thighbone flutes etc. whatever monks and native done, it means to chase away the evil spirit from the lost Buddhist kingdom. We can see mask dance and skeleton dance.

The morning will use with visiting natural hot spring north east of Lomanthang which takes 3 hours. Today is the final day of the festival and again it starts at 2 pm. Tiji centennial ends with the ceremonial destruction of the evil remains, represented by some long black yak hair and red torma (barley cakes). The demons red remnants are set out on an old tiger skin, whereupon they are attacked by bow and arrow, slings, and the old guns. The poor devil's remains are overturned upon the ground, each time to a wild cannonade from the old muzzle-loaders and a wave of cheers and smoke. The red hat monks chant and play the dungchen, elephant skin drum conch and cymbals on the palace ground. Then monks move with playing instrument across the village and stop a few corners before reach terminal. One monk will dance on the rhythm of chant and instrument, the old gun explosion on other corners of the ground.

It is around 6/7 hours off-road drive from Lo-manthang to Jomsom. Along the driving journey can stop and stretch your leg also enjoy to see the surrounding scenery. Drive through-out villages and mountains till Chhusang village then continues journey bank of Kaligandaki River to Jomsom via Kagbeni village. You will have impressive Mountain View of Nilgiri and Dhaulagiri en route of Jomsom.

We are taking an early morning flight from Jomsom to Pokhara, the flight follows the route above the world deepest gorge between Mt. Annapurna and Mount Dhaulagiri. Upon arrival, Pokhara airport transfer to your hotel then enjoys a day by exploring colorful Lakeside and Phewa Lake.
In option can drive to Pokhara from Jomsom which would be approximately 10 hours, the road contains both off-road and paved road through the villages, gorge, cultivate terrain and densely populated cities.