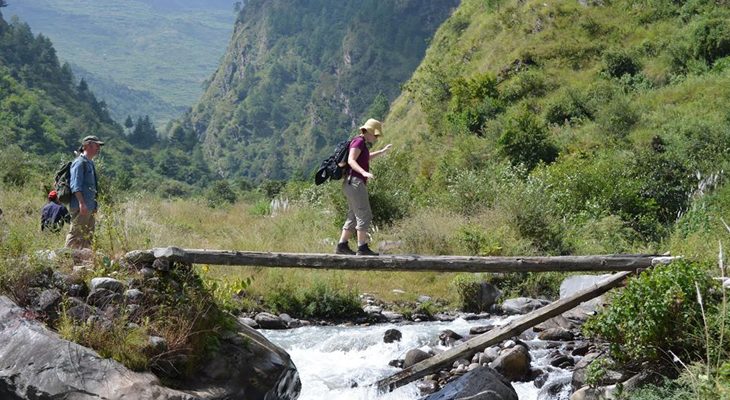 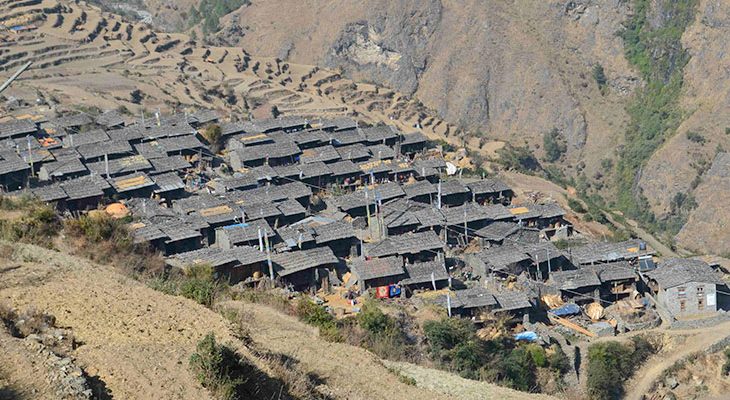 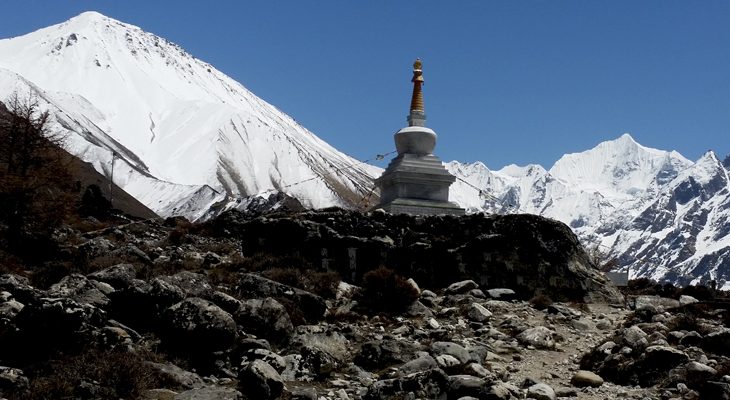 Tamang heritage trekking trail is lying west side of the Langtang valley trek which is more popular for the unique Tamang culture as well as the handicraft and exceptional architecture. Concept to open the Tamang heritage trekking trail was direct helping to the local community and upraise the lif. In the beginning period, only home-stay and community lodge are operated for accommodation but later on turn into the lodge. En route of Tamang heritage trek can experience and in touch with Tamang people. The Tamang indigenous people believed their ancestor was Tibetan as trekking route marked near to Tibet border there local dialect are almost similar to the Tibetan language. A 6 days trek offer lots in the Himalayas where a folk can experience indigenous Nepalese culture, close mountain vista, green farmland, dense mixed vegetation forest, blue-green color lake, dip in natural hot spring, get glimpse of common birds and animals, walking on both wooden and iron bridge high above the wilderness river. A moderate trek mostly leads on the hilly terrain an elevation between 1600 m to 3100 m with ascending up on a remote hill and steady descending on the rugged mountain.
En route of Tamang heritage trail passes several villages, mostly inhabitants by Tamang and Sherpa including Gatlang, Chilime, Tatopani, Nagthali, Thuman, and Briddim. As trek moving on visiting Buddhist sites also can see local are practicing Shamanisms on the villages. Also possible entertained by a local authentic musical show on the village in the evening. Then can also visit historical fort called Rasuwagadi where the Gurkha's won a war against the enemy in the 17th century.
A trek begins from Kathmandu with full day drive to Gatlang village, one of the picturesque Tamang village in Rasuwa district. Then next following days gentle climbing on the temperate climate on the cultivate hill where can see the grain plantation and animal husbandry. Then the third day of trek dip into nature hot spring which help you relax your painful muscles. After that climbing into the heavy forest to reach Nagthali ridge, the highest point of your trek. Nagthali Danda offers panoramic mountain scenery including Langtang Himal, Ganesh Himal, Paldor peak, Sirung Himal, etc. Then huge descend thru the Thuman village and the forest takes us historical Rasuwagadi and bank of Bhote Koshi river. On way to Briddim village cross the Kathmandu - Manasorovar road and short ascend up to another beautiful Tamang village. We believed, your Tamang heritage trek journey directly help to local people economic uplift from earth damages.

Getting There and Away
If anyone wants to do 6 days Tamang heritage trekking trail then travel to Gatlang from Kathmandu by private jeep or local bus. The bus leaves 06:00 from Kathmandu and delivers around 3/4 pm at Gatlang village. The public bus will be crowded and stopping frequently en route to pick-up and dropped the people. Then possible to travel Gatlang by private four-wheel jeep which takes around 7/8 hours. Standard Tamang heritage trail itinerary end-up Syaprubesi then back to Kathmandu by public bus/shared jeep/private jeep. After Tamang heritage trail can extend your trek to Langtang valley, Gosaikunda Helambu trek and Ruby Valley.

Possible food and accommodation on the trek
The basic accommodation is available with both common and shared bathroom plus solar or a gas hot shower. Most of the lodge is run by family and also have light in the room for the night.
The meals along with the Tamang heritage also much like another trekking route where most of the common trekking foods are available at a reasonable cost. The local chef prepares all the food with organic gardening vegetable. But in this area, the Tibetan bread and mo are totally different than another major trekking route.

When should do Tamang Heritage Trail
Tamang heritage trekking trail is lower altitude trek in Nepalese Himalayas can do from September to May but still, October/November is the best of the year. During the winter possible to walk on snow in Nagthali Danda but it offers more mountains view any other time than a year.

Once you provides us your Kathmandu arrival details, we pick you up from on arrival gate of Tribhuvan international airport. The airport representative stay standby with your name on placard. Then you'll be welcomed with fresh garland after that short driven to your hotel. After room check-in take your own time for relax and leisure.

Today we are driving to Gatlang, our drive continue on Pasang Lhamu highway passing a beautiful landscapes and glimpse of Langtang range and Ganesh Himal, We resume driving east back of Trishuli river which is very popular for white water rafting. Then our drive passing the kaliskathan, Mulkharka where we can see the grave of the villagers then shortly drive through the jungle will bring you at Dunche and Syabrubesi. Now driving goes on bumpy road till the Bahun Danda and then Gatlang.

Our journey start descending through beautiful landscape territory to Chilime. After crossing the suspension bridge and walking through the small and beautiful traditional Tamang village we then climb up the grain terrain and villages. This path brings you at Tatopani- natural hot spring. You can visit the pool and take a dip to remove your muscles pain.

Our trek continue climbing up on the dense forest. We often encounter the wild animals monkey and barking spotted deer. Then its a visit to the very old Buddhist monastery in the village and take beautiful photographs. Continue climbing on terrain alpine to Nagthali – very important for views of mountains including border Himalayas, hill and deep valleys.

We have sunrise view on Himalayas then descend through alpine forest, passing Thuman and keep descending to the foot of Nagthali. We then cross the Bhite Koshi which flows from Tibet. We meet local people burrowing up and down for shopping at the border where they are able to buy very cheap Chinese goods. After lunch we resume our journey climbing up through the village and cross the river reaching the Briddim village situated on top of the sloppy hill and the rhododendron forest. Tonight we stay in different houses on the rotation basics, spending the night with host family for an amazing home stay experience

The trail descend through the pine forest and passing village. The path offers wide views of valley and before crossing the Bhote koshi river meeting the very famous Langtang valley trail and then reach at Syabrubesi. Along the river the trail leads to the Border of two country which was used to be very important in 17tth /18th century because of accessorial trade with the Tibetan people where they exchange foodstuffs, salt and mountain goat. In optional you can continues your trek to Langtang valley from Briddim

The bus departure 07:00 hours in the morning and have a delightful breakfast before that. It is 6 hours' drive to Kathmandu on Pasang Lhamu highway, the road often gets busy because now Nepal importing goods from China via Rasuwagadi customs. The drive also provides spectacular mountains view and the Trishuli valley from the Kaliskathan. Upon arrival at Kathmandu bus station transfer to hotel then enjoy yourself at Thamel.

Your Himalayan journey ends up with us by today and hopes you had enjoyed an able Himalayan holiday with us and get back home with lifetime trekking memories. We, Musical adventure trekking Pvt. Ltd airport representative transfers you, airport 3 hours before your scheduled flight.