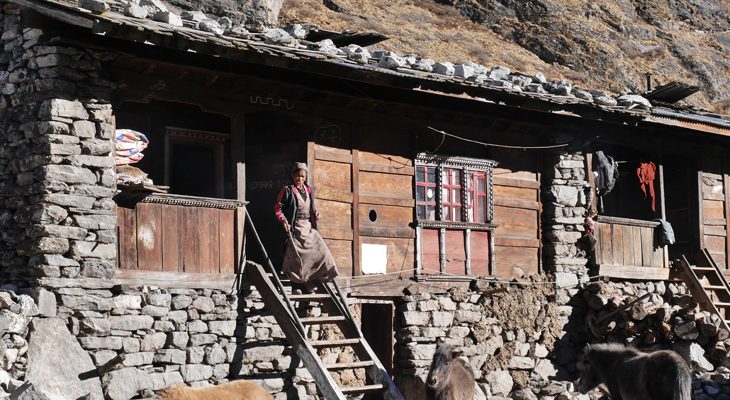 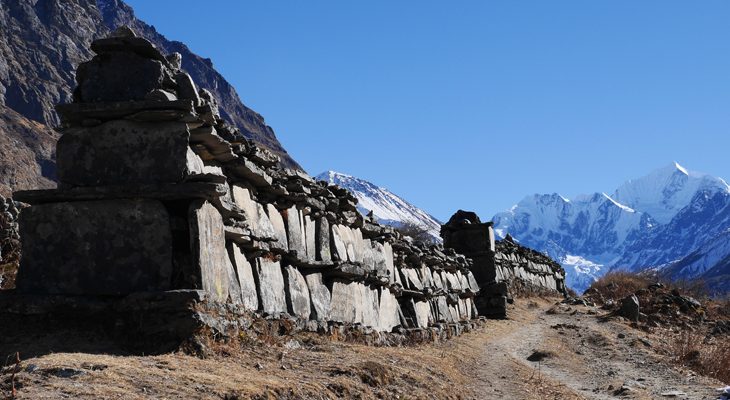 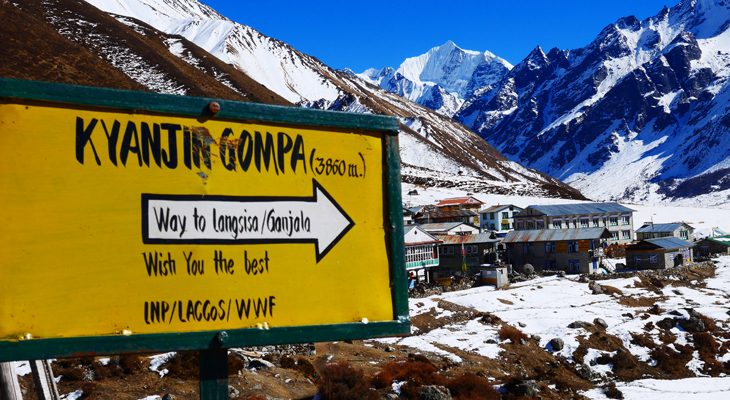 Langtang Valley Trek, a short moderate hike in the diverse altitude with a side trek to Tsergo Ri, Langshisa Kharka, Kyanjin Ri that exposing the massive view of Himalayas, glacier, and culture. A trek is fairly less busy than the Annapurna region and Everest region in-fact it is being an alternative to them. But after the 2015 earthquake, it became one of the most iconic treks in the Himalayas. Actually it has all the major elements that require mountain hiking like High Mountain, elegant culture, glacier and moraine, and diverse landscapes. 8 days Langtang trek is for all the outdoor adventure explorer but still perfect for tied scheduled and novice trekkers because no need sweat lot.

An easy to moderate mountain trek taking into the depth of the remote mountain villages' residence by indigenous people Sherpa and Tamang. Geographically the Lantang valley frontier sharing with Tibet plateau thus this mountain tribe is a lot of influence by Tibetan Buddhism also chines products reached in their doors. Trekkers will have pleasant hiking into the enchanting Buddhist terrain with exploring a lot of Buddhist sites. Also, witness shamans and monks are practicing Buddhism on the monasteries and Gompa, the locals also do regular homages in the houses. Langtang valley trekking scattering into the Langtang national park, several species of the birds and animals live in the conservation, and numerous of them frequently spot. A trek is suitable for any good physical level nature and culture lover but still, pre-training is required for enjoyment in the mountains. It is sunning trekking into the tropical to alpine terrain in the mountains. Musical Adventure Trekking organizes Langtang trek cost depends on the services you wish to have during the trek. Langtang Valley trek package cost is inclusive of guide, porter, accommodation, transportation, and meals. We also individually arrange licensed trek guide and strong experience porter.

Langtang valley trek starts from Kathmandu with a day drive to Syaprubesi, a small town on the bank of the Trishuli River in the Langtang National park. From here pleasant hiking through the superlative forest and Tamang village to the Langtang valley. The route densely habitants of Sherpa and Tamang these ethnic groups are the devotion of Buddhist religion so the entire route is elaborated by Buddhist relishes like Buddhist monasteries (Gompa), sequences of the stone cairn, carved stone mani wall, and Buddhist praying flags. From Kyanjin Gompa can do several days trips around like Kyanjin Ri (Peak), Tsergo/Cherko Ri, Langshisa Kharka, and Ganjo La (Kangja) high camp. The wilderness side trek en route to Langtang valley trek provides the 360-degree views of the Himalayas, glacier and snow leopard friendly unfertile terrain. On the way back, Kathmandu visits the memorial of the 2015 earthquake death in Langtang village with a name list. Langtang valley trek length can be customized from 5 days to 10 days also possible to extend to Tamang Heritage Trail Trek Route, Gosaikunda Lake, Gangja La pass and Helambu Circuit trek.

Our airport representative will be waiting, the arrival gate of the Tribhuvan international with your name on the signboard. Then transferring to your hotel, it about 20-30 minutes depends on the your hotel location. After room check-in have a leisure time.

A Langtang trek begins from Kathmandu with 7-8 hours' drive on the tar road to Syabrubesi. There is an option to get Syaprubesi by private or public transportation. We travel by standard bus from Kathmandu to Syabrubesi/Syaprubesi. The road includes flat, up and down also zig-zag, a bus journey provides stunning Mountain View of Annapurna mountain range, Manaslu range, Ganesh Himal and some snow peaks of Langtang region onward. Several time bus stops on the villages for the meals permit check-in and toilet. Upon arrival Syaprubesi room checked-in then later visit natural hot spring on bank of the Bhote Koshi River.

Today is the first day of our trek, from Syaprubesi trailhead alongside wild Langtang River and then walking inside the deep forest onwards Pairo. We gradually climbing-up and passes tea shop, tiny natural hot spring also get a glance of the wild honey bee, monkey and varieties of birds. Upon crossing the suspension bridge on Langtang River, a trail lead steeply up into the rhododendron forest to Lama hotel. Lama hotel is a beautiful place inside the forest with 6 basic neat and clean lodge.

We start our trek, the trail passes through the dense pine forest along the Langtang Khola, and we enjoy to see first glimpse of Langtang Lirung. After that we pass villages called Ghoda Tabela, Thangsyap, impressive water mills, prayer wheels, chortens where beautiful inscription carved on rock. After arriving Langtang village short tour to Langtang memorial where can see name list of 2015 earthquake tragedy.

Easy hike to Kyanjin gompa with following gradually routes on alpine terrain. The Langtang village is set on a base of the east face of Langtang Lirung and west bank of Langtang Khola. After breakfast take-off from Langtang village and a trailhead to Kyanjin Gompa with passing the longest stone mani wall also come to cross with yak. On the way, you'll be passing small tea stall, painted Buddhist stupa, and recently operate hydropower on way to Kyanjin Village. After reaching Kyanjin Gompa visit the coffee shop and Cheese factory. You also have an option short side trek to Langtang Lirung and Kinshung glacier west side of the Kyanjin Ri

There are various options to spend the spare day in Kyanjin gompa. If you want to test your body limit then you should climb to Tsergo/Cherko Ri, 4985 m above the sea level also provides the best view of the surrounding Himalayas and the large alpine valley. Then another extremely adventure trip can do Ganja/Kanja La pass high camp and it specialized for the stunning view of Langtang Lirung and the glacier. Langshisa Kharka Day Trip is another beautiful hike in the alpine terrain and glacier valley, the path relatively easier than both Tsergo/Cherko Ri and Ganja/Kanja La Pass but still get grand Mountain View in the snow leopard valley. The Kyanjin Ri (Peak) climb is easiest of among also short day hike, the view of the glacier and mountains are stunning. Click here for details.

A trek from Kyanjin Gompa to Lama Hotel is mostly walking downhill through the yak grazing pasture valley and dense forest of the mixed alpine and tropical climate trees. A downward trek covered 20 Km also expose the culture glimpse of Tamang and Sherpa ethnic group. It is huge altitude drop in single day upon arrival Lama Hotel easier to breathe because surrounding by the jungle.

We have an optional route to get back at Syabrubesi. Lower and upper route, Upper route might interesting because taking new trail that provides magnificent view of the villages, valley and Ganesh Himal Range Mountains.
Upper Route via Sherpa gaon & Khanjin, from lama hotel short descend to Rimche village a junction of the upper and lower route. Then we gentle climb up on the pine forest and grassy sloppy mountain to Sherpagaon. A trail offers picturesque view of Thulo Syabru village and Lauribinayak ridge also catch excellent view of Ganesh Himal from Surka village. Now follow descend trail to Khanjin village we visit Buddhist monastery and continuous to Syaoru Besi.

Lower Route Via Bamboo, we descends on the grit trail through the forest of Langtang national park. Also passing loca tea shops namely Bamboo, Pairo, Dhomen and then finally get back Syabru besi. The trail let you enjoy with pristine nature and spot species of the tropical climate birds.

Syafrubesi to Kathmandu bus trip that is a marvelous journey on the mountain road. A voyage lets you have spectacular drive experience through the zig-zag mountain road that includes jerk and tar. Relatively a bit longer than drive to Syabru Besi because afternoon and evening Kathmandu entrance always has more traffic than morning. It will be an excellent drive with viewing numerous mountains, diverse landscapes, and culture glimpse. It also fun and hilarious drive where the drive play music (Nepalese, Hindi & often English) throughout the drive and some of the passenger standing till terminal destination. Upon arrival, Kathmandu transfers to your hotel then authentic Nepalese dinner for the evening.

The fascinating adventure and cultural exploration Langtang Valley Trek end here by today. We hope you had a memorial and fantastic adventure with us in the Himalayas. As per your international flight scheduled transfer to Kathmandu airport 4 hours before the flight time