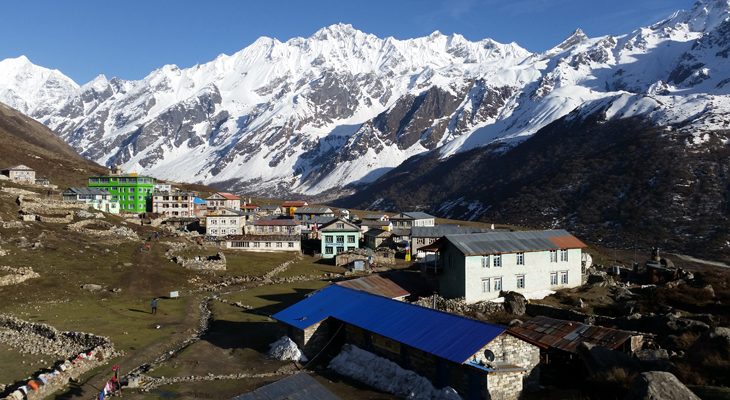 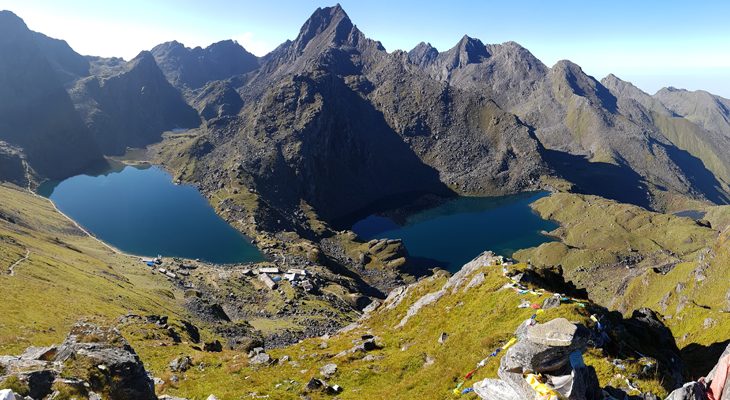 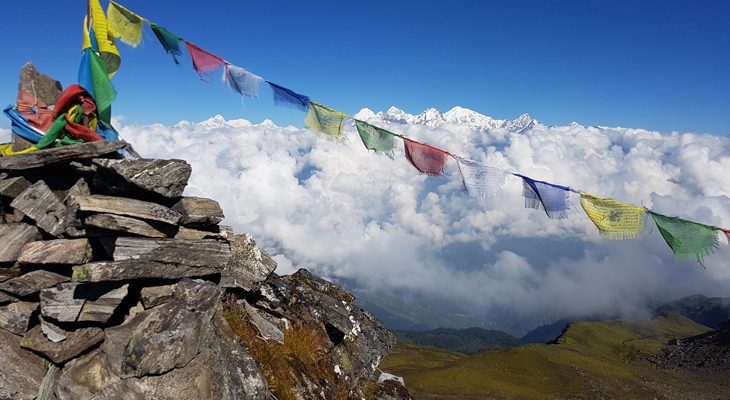 Langtang valley and Gosainkunda lake Trek- beautiful path marking throughout Langtang national park and let you climb to Gosainkunda lake and Kyanjin Ri then crossing over non-technical Lauribina La Pass.
Langtang Gosainkunda Lake trek traverses on Langtang national park also famous for the easy trekking pass called Lauribina La pass. A moderate trek vastness near to Kathmandu, on the bottom of Langtang Himal, Dorje Lhakpa and enclosure of Ganesh Himal. This trek is highly recommended for a family holiday means to travel with children without sleeping in alpine climate sights stunning view of glaciers and close scenery of panoramic mountain range. The folks relish with massive mountain array on Buddhist settlement where local does not sacrifice animals. Beautiful nature and cultural combined trek contain short steady-up, flat, steeply descend on grit and mostly gentle ascending up throughout the pristine forest and cultural villages of different ethnic groups like Sherpa, Hyolmo and Tamang. The local is depended on yak farming, agricultural and certain people are involved in tourism hospitality also can visit organic yak cheese factory Kyanjin and Chandanbari. First, a section of Langtang trek route passes along the wild Langtang Khola into the dense rhododendron forest and bamboo shrubs, these area is inhabitants of rare Red pandas plus common wildlife. On Langtang valley route lodge are available till Kyanjin Gompa then effortlessly can do side trek to Tsergo Ri, Langshisha kharka with leaving luggage behind in the lodge. En route of Langtang Gosainkunda Lake trek highest places for sleep on Gosainkunda Lake (14100 ft). Lauribina pass (4620 m) is grading as simple trekking pass seldom see snow on the summit but it offers rewards view of cliff and mountain range including Annapurna, Manaslu, and Ganesh Himal. Anti-clockwise of the Lauribinayak pass is part of Helambu trek, Helambu region is famous for the Hyolmo culture and the layer of the thousand lower altitude hills. The diverse landscapes of Helambu mesmerize your trek then trek ends up on Melamchi Bazar or Sundarijal on your request. Musical adventure trekking set-up Langtang and Helambu trek itinerary on client request, there is possible to extend and cut-off standard program.

Trek starts and ends
A trek begins from Syaprubesi, both private and sharing drive is in an option to reach Syaprubesi and approximately 6/7 hours' drive on a paved and dusty road. Because of short off-road only bus and jeep are providing services daily. Then there are various selection to finish the trek, can catch the jeep from Melamchi gyang, Melamchi Bazar or Sundarijal to get back Kathmandu.

Accommodation Status on Langtang Helambu trek
Basic accommodation is available on the trek, most of the villages have twin sharing the neat and clean bedroom. Both private and sharing Asian squat and English toilet are available, possible to have hot shower few places. Most of the lodge's bedroom have lights, it supplies from hydroelectricity and solar power. Above 2500 m altitude lodge fire-up in the chimney on dining hall that makes you keep warm in cold temperature.

Possible Foods/Meals on the route
On our package program, you may choose any foods from menu carts where various foods are indication including local and multi-international. Whatever you order it takes minimum 30 minutes to prepare in the kitchen and most of the local restaurant has a traditional kitchen where they use death wood.

Trip Difficulty
Langtang and Helambu trek is grading easy to moderate with rising concentrated 5000 m (a day tour) above sea level. The route is pretty easy maximum path is gentle ascend up in thick forest and traditional villages. Anybody can do this trek even children and beginner trekker's as well. Any healthy person can conquer Langtang valley and Helambu trek, no need to worry about altitude.

Our official airport representative will be at arrival gate with your name is sign board. S/he will transfer you at hotel. While driving to hotel s/he will give short brief about Kathmandu and history of Nepal.

Your guided tour will start at 9am with knowledgeable tour guide, you will take into the city of Heritage, god and goddess,

Pashupatinath Temple:
The holy place of Hindus where Hindus do cremate of death people. The holy Bagmati river follow across the midst of the Pashupatinath temple.

Boudhanath Stupa:
One of the largest Buddhist stupa in Kathmandu valley. The color of stupa dominate the skylines.

Swayambhunath Temple:
The viewpoint in middle of Kathmandu valley. Swayambhunath is model of religious unity of Hinduism and Buddhism where you will see temple and monastery at same spot.

Kathmandu Durbar Square:
The square used be Royal palace and surrounded by many temples. We will visit house of living goddess and get bliss from her. The entire complex is witness of newari architecture from 15/16 century. At 5pm meeting with your trek leader/guide on pre-trek discussion. Then if you need to buy anything's for your trek. Your guide will take you in the shop.
Overnight at Hotel.

The drive starts through the northern hills of Kathmandu on the Pasanglamu highway enjoying the Himalayan views of Langtang and Ganesh Himal range. We will see beautiful landscape and lifestyle of rural village. The bus stop Trishuli bazar for the lunch which is half way of the drive. Then drive continue passing Kalikasthan, Dunche then descending to Syabrubesi.

Today is the our first day of trek. After crossing the Bhote Koshi river which follows all the way from Tibet, we walk along the Langtang Khola and gorge, climbing gradual up through the dense forest and passing the water fall, hot spring and encounter the wild bee hive and Gray langurs. After Bamboo the trail leads steep up to Lama Hotel.

We start our trek, the trail passes through the dense pine forest along the Langtang khola, and we enjoy to see first glimpse of Langtang Lirung. Then we pass villages called Godatabela, Thangsyep, impressive water mills, prayer wheels, chortens –beautiful inscription carved on rock.

We start our trek walking through the beautiful Tibetan style village, yak pastures, then pass the second largest mani wall in Nepal made by stone. Gradual up on paved walk through the yak pasture brings you to Kyangjin Gompa. Now you are surrounded by Himalaya's.

Today we do side trip to either Kyanjin Ri or Tserko Ri, Both of them presets impressive views of white snow-capped mountains and massive deep valley, sparking and frozen lakes. Compare to both view point Tsergo Ri is tougher and better view than Kyanjin Ri. The trail start passing villages and ascending up through yak pastures. As you climbing higher the view seen bigger and closer. After spent while in summit retracing to Kyanjin Gompa.

We retrace, pass through the Langtang village and walk through the beautiful dense forest to Lama Hotel.

We retrace along the Langtang Khola to Pairo Thaplo then climb up through the jungle. After the crossing suspensions bridge the gradual up trail lead to typical tamang village known as Shyabru village. The village offers amazing sunset view on the Ganesh Himal.

After breakfast the trail leading up through the villages and then jungle, the steep up trail makes you tired but as you climbed higher the view becoming amazing. You will visit Yak Cheese factory at the Chandanbari.

The gradual up trail start from Sing Gompa, it goes through dense pine forest with magnificent view of Langtang Himalayas. After Cholang Paty, the trail climb steep-up to Lauribinayak with great view of valley and Langtang Himalayan range. Lauribinayak offers magnificent Himalayan range with deep valley.
You will have an amazing sunrise view on the Himalaya then the trail ascending to Nava Buddha, Nava Buddha is one of the best viewpoints along the Langtang Gosaikund Lake trek. You will see the panoramic Himalayan view from Annapurna range, Mt. Manaslu, Ganesh Himal, Langtang range etc. After that gradual up trail leading and passing the few lakes to Gosaikund Lake. The amazing sunset view is seen from Gosaikud lake and the lake declares as a holy lake by Hindu’s. Hindu’s believed, one upon in time Lord Shiva has drunk poison and then he became so thirty, Lord Shiva use his weapon, a trident, then water came out from the rocks After Lord Shiva drunk water left water run down and became a lake. People believed Lord Shiva has taken bath in Gosaikund Lake that’s why on occasion of a full moon on august people take bath from this holy water.

The trail retrace from Gosaikunda Lake to Chandanbari with magnificent view of valley and Himalayas.

The route follows downhill through the dense forest of different vegetation like rhododendron, pine and silver oak trees also possible to see plenty of Marijuana plants during the autumn. The maximum path is steeply down on the crumbling trail, a route expose colorful birds and animals. We cross a suspension bridge over River of Gasaikunda Lake then short distance walk to Dunche, heart quarter of Rasuwa district.