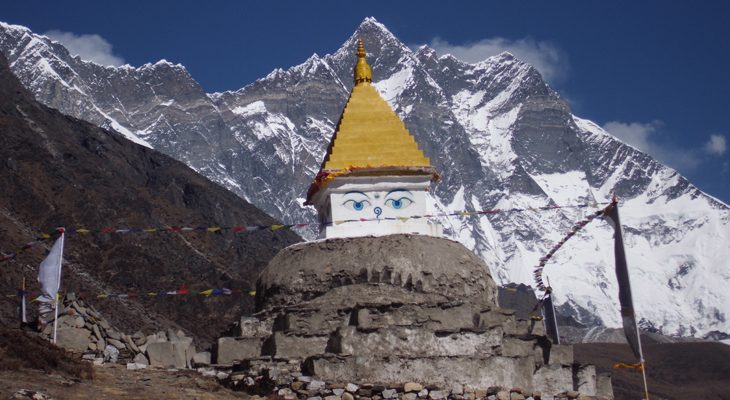 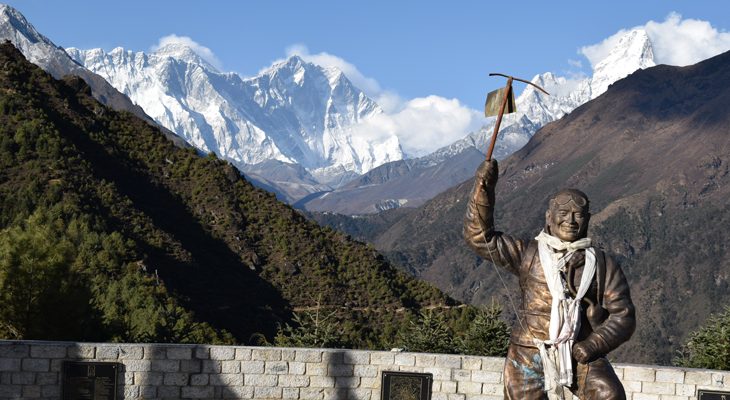 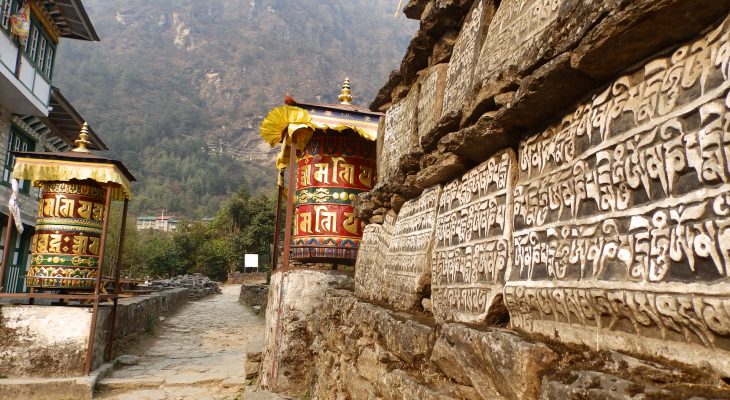 Everest View Trek AKA Tenzing-Hillary viewpoint Trek. A one an half week length Tenzing and Hillary view trek AKA Everest view trek are one of the short and sweat treks in Everest region. The trek is ranking in a moderate trek in the lap of Khumbu Himalayan range of Nepal. The trek initially starts with a short mountain flight to Lukla airport, known as Tenzing Hillary airport in Khumbu Nepal. The trek follows en route of most popular Everest base camp trail, which was mark after Edmond Hillary and Tenzing Norgay ascent summit of Mount Everest on 29 May 1953. We trek through one of ethnic group native village, who known as Sherpa (The climber and highlander group). Our trek will continue on a rhythm of yak and Buddhist chant, spending overnight with Sherpa family at Phakding. Namche, Tyangboche, Khunde, Monju, and Lukla, where we will meet with Buddhism. The entire trails and villages are colorful of Buddhist praying flags. The carving chant with the panoramic Himalayas at backdrop will provide beautiful shots. The Kathmandu Lukla flight will give you exclusive Himalayan view including Ganesh Himal, Langtang range, holy mount Gaurishankar, and entire Everest Himalayas. As we reach at Tenzing Hillary viewpoint just above the Khunde village, we will have a panoramic view of Khumbu Himalayas embracing Mt. Everest, Nuptse, Lhotse, Mount Baruntse, Island peak, peak 38, Kwande, Ama Dablam, Thamserku, Kusum Kangaroo. Besides the breathtaking Himalayan view, the viewpoint offers deep Khumbu valley with typical and unique Buddhist Tengboche monastery. We will have a stunning sunrise and sunset view on the Mt. Everest from holy Tyangboche Monastery and be participating at the holy ceremony at the monastery hall after 3 pm. When to do trek:
Tenzing Hillary View Point Trek can be done throughout the year but still the two peak seasons are recommended to do Autumn (September – November) & Spring (March-May).
September – October – November:
This is one of the best seasons to do Tenzing Hillary Viewpoint Trek, The weather is clear for a great view of the mountains. The temperature will be around +20º degree during the day and temperature will be +3º degree in the night and morning.
March – April – May:
This is a second best season to do Tenzing Hillary Viewpoint Trek. Spring comes in as winter moves out. The weather will be clear, a little windy but the temperature is the same as in autumn. This is a season of blooming, rhododendron, magnolia and other beautiful Himalayan flowers in such a colorful array.
December – January – February:
Tenzing Hillary Viewpoint Trek can do during these months. The view will be awesome but some times there will be snowfall. The temperature will be cold in the day and night due to the snow.
June – July – August:
These are the monsoon months.  Weather is wet and cloudy. Flights may be delayed or canceled from Lukla – Kathmandu – Lukla But a trek to the Tenzing Hillary Viewpoint is still possible to do it.

Once you provides us your Kathmandu arrival details, we pick you up from on arrival gate of Tribhuvan international airport. The airport representative stay standby with your name on placard. Then you'll be welcomed with fresh garland after that short driven to your hotel. After room check-in take your own time for relax and leisure.

A 35-minute scenic flight from Kathmandu to Lukla. At Lukla the porters will meet to carry the trekkers bag packs for the entire your trek in the Himalaya. The trekking trail starts along the Dudh Koshi River, passing through the Sherpa villages of Chhupulung, Thado Koshi, Ghat, Phakding reaching TokTok. The view of Landscapes, Mountains, Tibetan word carved in rocks and multi-coloured Buddhist flags and other exciting sites along the trek makes it really interesting.

From Toktok the trail starts and goes along the Dudh Koshi river passing beautiful sherpa villages, crossing the suspension bridge and trekking in the forest. After Monju we trek on in the EVEREST NATIONAL PARK and have the first glance of Mt. Everest with other high Himalayan peaks. After a check on the park permit we cross the river confluence between Dudh koshi and Bhote koshi. Its then a ascending up in the jungle with great views of valley and mountains before reaching Namche. Namche is gate way of Khumbu Himalayan where you will get all necessary needs.

Today we have a rest day. We will explore Namche bazaar with all the buzzing shops and cafes. We will do short walk and visit the Sherpa Museum.

The trail lead through the Namche village and short ascends take us at the ridge, we see magnificent mountains view including Mt. Everest, Lhotse, Nutpse, Kwande Ama Dablam and numerous other peaks. As trek continues descending through the villages and forest to Dudh koshi river. Now the trail climbing-up through rhododendron forest up to Tyangboche Monastery.Tengboche lies on the ridge and offers the amazing sunset view on Mt. Everest, Lhotse and best spot to take a photographs of Mt. Ama Dablam. An afternoon join to see daily monk ceremony in the Buddhist monastery.

We see amazing sunrise on the Mt. Everest and other numurous peaks. After breakfast descends to Dudh koshi river and cross the suspension bridge the trail continue climbing up through the villages with great view of Himalayas. Finally we arrive at twin village Khumjung and Khunde, we visit Khumjung school run by Edmund Hillary foundations, Yeti skull which is safely kept in Khumjung Monastery. Continue our trek to Kunde.

We go and visit Khunde Monastery, hospital then our trek starts. We trek on through yak pasture, passing yak farm reaching to Namche.The trail descends through Namche village and catch last glimpse of Mt. Everest before reaching at Monju.

As we trek back the trail retrace opposite as we did before along the river to Lukla. As today is the last day of the trek there will be a fare-well dinner with the trekking crew.

A 35-minute scenic flight from Lukla to Manthali airport (Ramechhap) gives you a great view of the Himalayan. Upon on arrival Ramchechhap drive begins to Kathmandu which takes 3/4 hours drive then transferred to your hotel.

Your Himalayan journey ends up with us by today and hopes you had enjoyed an able Himalayan holiday with us and get back home with lifetime trekking memories. We, Musical adventure trekking Pvt. Ltd airport representative transfers you, airport 3 hours before your scheduled flight.